On the 14th April 2016 we went to Echuca. We took a 1947 Ford sedan Super DeLuxe. We met near a person called Gary’s house. Our nanna and poppy took their 1939 Mercury. The next stop after Gary’s house was Tailem Bend. On the way there we saw train tracks, trees, bushes, cars and towns. We were staying in Swan Hill overnight. It was a tiring drive there. We stayed in Cabin 19 and I slept in a double bed.

We went to a person’s house for tea. His name was Peter Ninnis. He had a 1949 woodie. Jenson my annoying brother spewed next to two budgies. It went everywhere! I got to wear my dad’s jacket because I gave mine to Jenson because his was dirty. When we got back to the cabin, we went to bed. 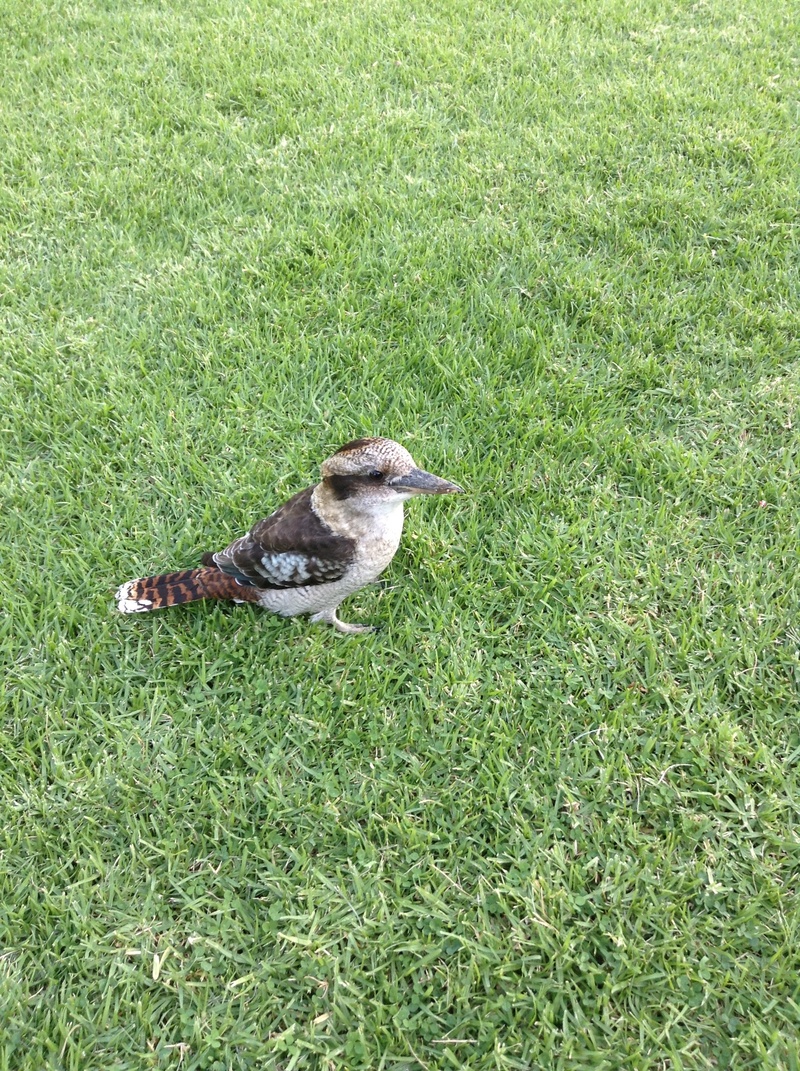 The next day we went to Echuca. In the morning daddy was getting the car ready. We saw the same things on the way.

When we got to Echuca we had McDonalds for lunch, then we went to the cabin. We saw some Kookaburras. I called one of them Cook. He or she was very friendly and like kabana. Cook is brown and white with a bit of blue. Cook has friends. There are a lot of birds like magpies, small little birds and colourful birds. Cook likes to sit on trees, grass, chairs and umbrellas.

In front of the cabins there is a tennis court and a playground. My annoying brother Jenson annoys me when I am playing tennis.

We went to a school to get dad’s rally pack and we had pizza for tea.

The next day was Saturday. We got up really early so Dad could get the 47 to the school for judging. Mum took me and my brothers to McDonalds for breakfast. We came back and looked at the cars and played on the playground.

When Dad had finished judging my mum and nanna went on a paddle steamer. When mum got back we went to the cabin.

We had breakfast and met at the school oval. We drove to a place called Lockington. We had a look at things from the past like tractors, things you would find on a farm and even a tram. We had sandwiches at Lockington, then we went to Echuca to look in an Op shop. My mummy bought an old dress and Marcos, Jenson and I got some cards.

The next morning we went back to the restaurant where the dinner was, for breakfast. After we ate we had a look at a 1936 chassis, it had an engine and wheels.

Then we went to the Port of Echuca. A man gave a talk about Echuca and my brothers and I had spot sheets. We had to find Stretch the cat, a boiler, a wool bale, rail gauges, river measurements and a kerosene lantern. My brothers and I got a prize which was a lolly pop for doing the spot sheet.

Then my Daddy, Mummy, my brothers and I went to a Holden Museum.

The next day we went to Rochester. We all met up at the Port of Echuca. When we left we were behind Alan and Colleen in their 1939 Ford DeLuxe. A bit down the road we wound up behind Ian and Carol’s 1935 Ford Phaeton. There was lots of interesting things on the way. Then we got to Rochester. The house we went to had a cat called Dennis. He was a nice cat. We had Morning Tea there.

Then we left Rochester and made our way to a place called Toolleen. We were behind Bev and Joe in the V-8 Pilot.

At Toolleen we had sandwiches, party pies and spring rolls for lunch.

After lunch we went outside and found the playground. There were trampolines and climbing things and they even had a dinosaur!

Then we made our way home, it was a very nice drive. There was a big bend and it was very steep. Looking out the back window I can see the car I want when I grow up, Mark & Margy’s 1947 Ford Coupe.

The next morning it was time to go home. We packed our things and made our way back to Adelaide.

The historic vehicle gathering held in the parklands was a very interesting day. A small group of V-8ers met at Vilis for breakfast and then drove around to the venue and parked with a multitude of makes and models too numerous to mention. As the Bay to City Fun Run was in progress that morning many thought Anzac Highway would be a problem but everything was OK. The Car of the Day and presented with a plaque was a 1925 Daimler owned by Gavin Rolls. Gavin is known to many V-8 club members and is basically a Street Rod man so to have an award for a beautifully restored original in a great accolade.

We have just returned home from attending the Gawler Club inaugural Veteran and Vintage Barossa Valley Run. What a great day, a grand procession of pre 1931 cars of all makes and models, shapes and sizes, from Model T Ford and Austin 7 to Minerva and Rolls Royce. It finished with all vehicles parked on the Greenock Oval. We then had lunch, but rather late, at the local hotel. Again it would have been great if more members could have attended but thank you to the small but enthusiastic members who did.

A very special thank you to Goran for supplying some breakfast while we watched the cars go by. 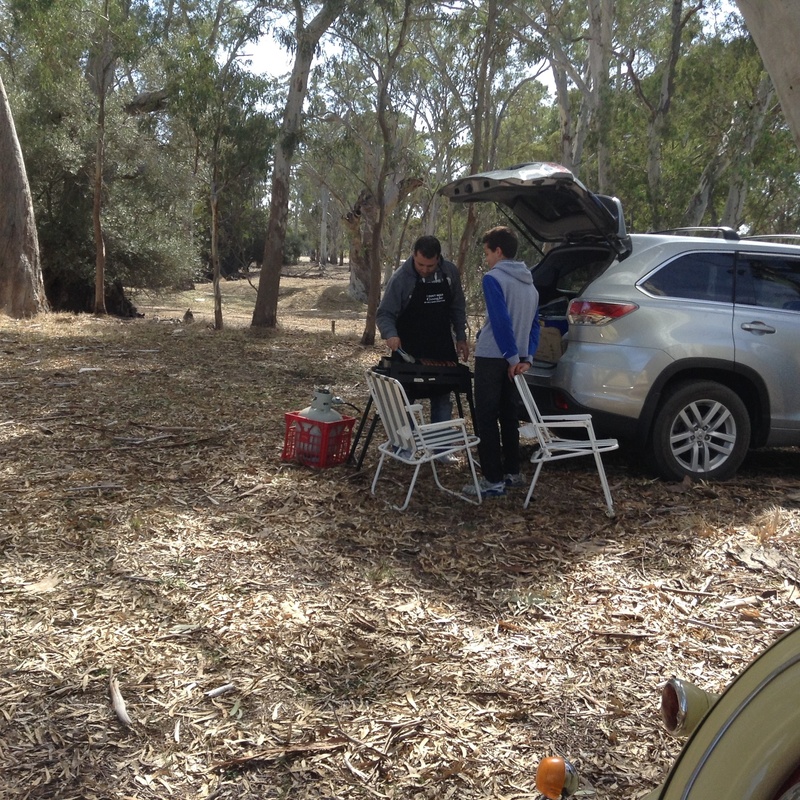 A very, very hot day greeted the members going to Frank & Val’s Christmas Run. Only Simon turned up with his ’47 Sedan with Marcos and Jenson. Everyone else rocked up in their moderns. After all it was going to be 40 degrees for most of the day. Frank had his Customline in Quinzi’s Confectionery car park where tea, coffee, water and assorted cakes were there for everyone to enjoy for morning tea. Antoinette and Joe (the owners) were there to show us around and we were split into two groups one for Joe to show around the factory and the other to shop and/or sample the various chocolates and sugared almonds. Antoinette had many samples for everyone to taste then purchase then the two groups changed over. Each group was gowned and capped for hygiene purposes and were shown all the machinery and workings that went into making the various confectionery which was very interesting and informative. 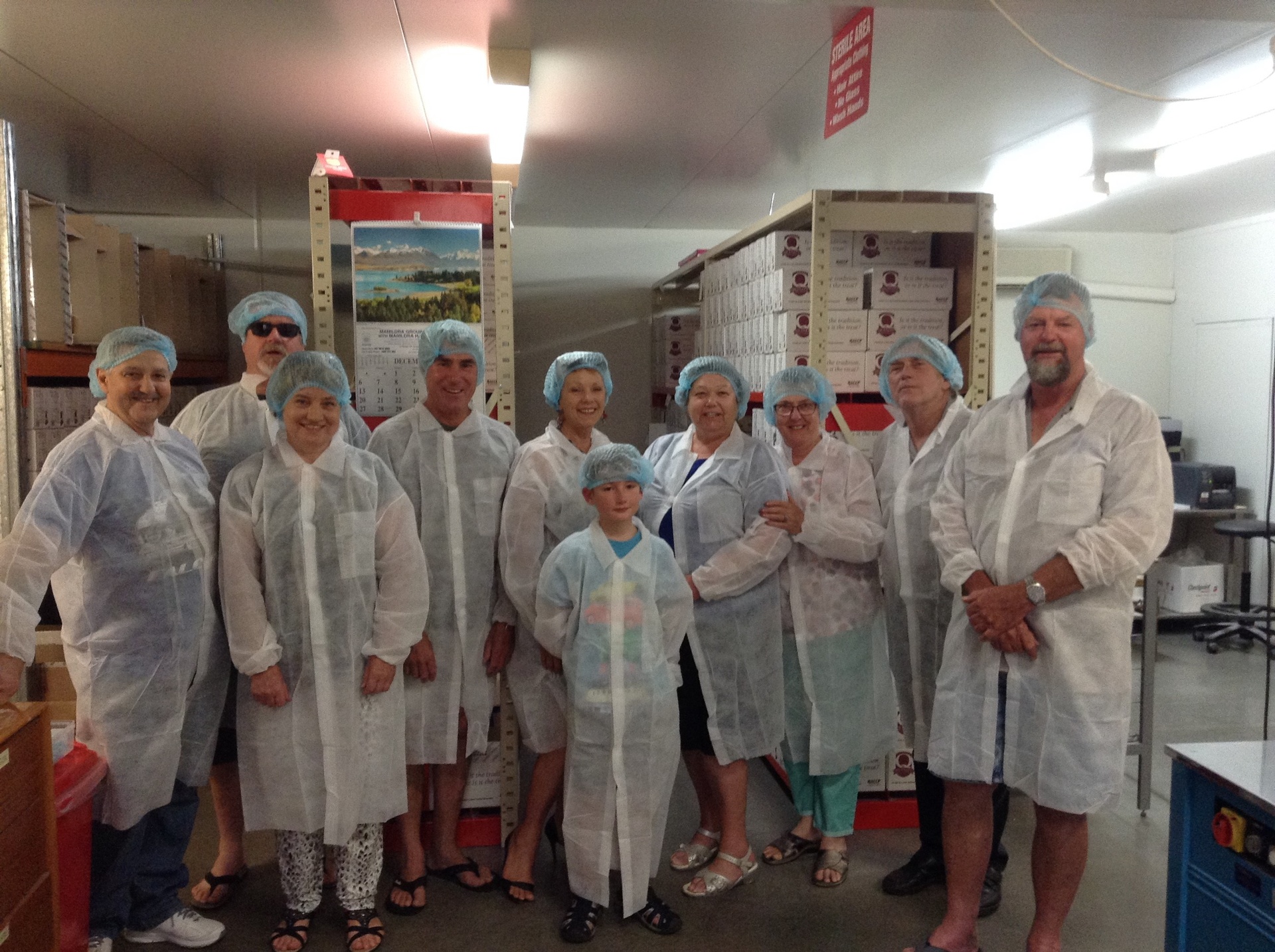 From here we all made our way to Modbury to Frank and Val’s home where we were treated to a lovely BBQ lunch.

Graham presented Frank and Val with a lovely gift basket and a bottle of wine on behalf of the club for their hospitality over the past 4 years of putting on this event.

The ladies were given a fancy bucket (either polka dots or daisies) each.

Despite the very hot weather it was a great day and some stayed until 6.00 pm before heading home or to other venues.

Once again the Ford Invitation Picnic was a great day with warm weather but this did not stop over 50 vehicles attending the day. The Military Museum came with 4 vehicles and they thoroughly enjoyed the day which raised $146.50 to go towards their funds for saving the Museum at Edinburgh.

Many thanks to those members who helped with the BBQ and those who donated items to the big raffle. A change to the BBQ with hamburgers as well as sausages which went down well with those who wanted them.

The Model A Breakfast Run brought once again a good crowd on a lovely sunny Sunday morning. Members from the Model A Club, Early Ford V-8 Club, Model T Ford Club and Ford 8 & 10 Club arrived between 7 am and 8 am for a short run around the local suburbs doing a quiz which again was a bit of fun.

A lovely breakfast of orange juice, fruit, cereal, bacon and eggs, tea and coffee was followed by pancakes if everyone still had room for them.

The quiz answers were announced and one of the runners-up was Peter & Dawn Honson.

Everyone was issued with a raffle ticket at breakfast time which I won a tin of shortbread biscuits followed by other winners who included Jacqui Tonkin and Deb Harris who won bags of lollies. I hope I haven’t missed anyone out.

It was a good start to a Sunday morning before heading back home before the day reached hotter weather. Some left and went on to the All American Day.